As Event specialists, we don’t just manage them, we create and inspire them. We have a passion for bringing your ideas to life with our bespoke event services and event production, so you achieve your objectives and make an impact that wows your guests.

We are proud to collaborate with some amazing clients

I wished to get in touch to say thank you for providing the centrepieces for the Gloucestershire Live Business Awards and working with us within our budget at such short notice. I also wanted to let you know that your staff was a pleasure to work with. Very friendly, professional and had the room setup with plenty of time to spare before guests arrived. Please pass on my thanks.

I just wanted to drop a note to formally thank you for pulling out all of the stops for our Christmas Social – the Peaky Blinders theme went down a storm and it looked UNREAL! The decor, props, bespoke items and attention to detail really made the event last night. As ever, you and the team were complete professionals and a dream to work with. Huge thanks and appreciation, I look forward to the next event already!

The room looked fab and we received some great comments. It was great to work with you again and it makes things run smoothly when we can rely on you and your team to get the job done. Gives peace of mind.

WOW, went to an event done by these guys and I was blown away. They transformed a banquet hall into something out of a fairytale. The staff are very friendly and professional. Would definitely recommend them to anyone.

Thank you to you and your team for all your help and support with the table theming for our UK 60-Year Anniversary celebration last night. Right from the very beginning, everything was so very professional and easy. The tables, gifts and award were absolutely fabulous and really added to the whole ambience of the evening, and I have had many wonderful comments about them from our visitors. 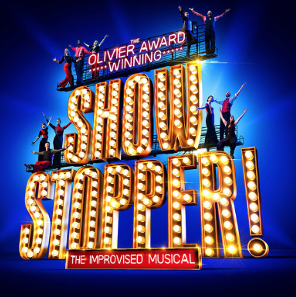 Showstopper! The Improvised Musical has been a rip-roaring success since the show started in 2008. It has had eleven sell-out years at the Edinburgh Festival Fringe, two West End runs, an Olivier award and a BBC Radio 4 series.

In the show, the audience meets a writer of musicals who is on a deadline – he needs their help. The audience shouts out suggestions of a setting, musical styles and the title of the show and they’re off!

The Showstopper team – cast and band – will then weave a brand-new musical in front of the very eyes of the audience, complete with hilarious characters, fabulous dance routines, beautiful songs, epic story lines, all sprinkled with the pzazz of a Broadway show.  This show has been adapted to run as a live virtual show, the audience still participate but via a chat option rather than a physical audience.  This would be broadcast in a studio and can be adapted to be family friendly

The following would be included in the overall cost: