As Pubs, Bars and Hotels open, many are considering how to make the fond British pass-time fun again! We share with you some top pub games that mean hours of fun!

Games have always been an important feature in many pubs from traditional pub games, team pub games to electronic pub games. They’re great fun and can make a visit to the pub even more memorable.

The history of pub games goes back centuries but historically, Kings, Queens and Governments controlled the playing of pub games and publicans were threatened of losing their license if they allowed games to be played. There were even serious fines under the reigns of Edward III and Edward VI for playing an innocent game of dominoes!

These days, games are an important part of pub culture and played in many pubs in the UK, sometimes to professional levels. Below, we review some of the top games people enjoy in pubs. 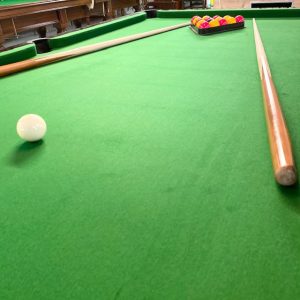 Backgammon: Whilst it’s one of the oldest pub games, backgammon is still a popular game today despite laws trying to ban it being played. Its origins come from the Middle East and became popular mainly due to the gambling aspect. These days, you can even get giant back gammon games being played in pub gardens!

Pool, Snooker and Billiards: When we create pub themed events, a pool table is a must for entertainment! The game was associated with riotous and disorderly behaviour and was banned from licensed premises in 1757, but nowadays snooker and pool tables create hours of fun and competition amongst pub-goers. 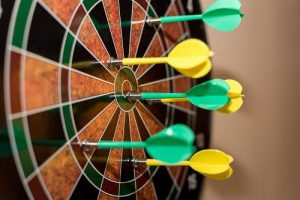 Darts: Whilst darts has been around for hundreds of years, its only recently become popular but is an iconic game in pubs. Several hundred years ago a version of the game known as ‘Puff and Dart’ was played where the dart was blown from a tube towards the target. Darts was made popular by the TV programme Bulls Eye and there are now teams who tour the country in professional darts matches!

Dominoes: Still a very popular game played with a set of 120 pieces and you can even play Giant Dominoes in pub gardens for fun. Some suggest that the game came to England from China others believe it originated in Italy or Spain, however this game is a firm favourite when you want to chill out with a pint!

Draughts: This can be a giant garden game or a board game with its origins in the Middle East, and like Backgammon likely to be introduced by the Crusaders in the 11th Century. Nowadays, it’s a game that everyone associates with pub nights out!

Amusement Arcade Machines: Some favourite pub games can now be played on amusement machines in pubs, but we think that there is nothing like the real fun of a pub board game. Popular machines that are often seen in pubs include fruit machines, simulators, retro arcade machines and quiz machines.

Card Games: Poker is one of the most popular card games in pubs, often just for fun. However, there are many other card games that are also popular for a quiet night at the pub with friends. These days its not uncommon to have cards nights at pubs

Bingo: Who doesn’t love a Bingo night at the pub? The game’s history goes back to 1530, to an Italian lottery called “Lo Giuoco del Lotto D’Italia,” which is still played every Saturday in Italy. Bingo is a popular game often played for cash and prizes. Bingo games are won when the player matches numbers on their card with ones randomly drawn by a caller. This is a firm favourite for pubs and restaurants to bring people together and a game that works in so many settings!

Pub Quiz: Pub quizzes became a feature of pubs in the 1970’s, but has grown massively in popularity especially in village pubs to bring communities together one night a week. It’s become one of the most played games across the country and especially during lockdown, almost everyone has participated in a pub quiz with a beer! 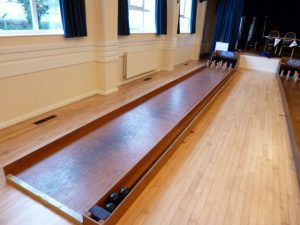 Skittles: There are skittles alleys and bowling alleys in many pubs, but this first arrived in pubs as ‘table skittles. It was used indoors with nine small wooden skittles on a raised wooden base, and a ball attached to a chain which players swing to knock over the skittles. These days, it’s a really fun physical game for an evening out playing skittles with friends.

I wished to get in touch to say thank you for providing the centrepieces for the Gloucestershire Live Business Awards and working with us within our budget at such short notice. I also wanted to let you know that your staff was a pleasure to work with. Very friendly, professional and had the room setup with plenty of time to spare before guests arrived. Please pass on my thanks.

I just wanted to drop a note to formally thank you for pulling out all of the stops for our Christmas Social – the Peaky Blinders theme went down a storm and it looked UNREAL! The decor, props, bespoke items and attention to detail really made the event last night. As ever, you and the team were complete professionals and a dream to work with. Huge thanks and appreciation, I look forward to the next event already!

The room looked fab and we received some great comments. It was great to work with you again and it makes things run smoothly when we can rely on you and your team to get the job done. Gives peace of mind.

WOW, went to an event done by these guys and I was blown away. They transformed a banquet hall into something out of a fairytale. The staff are very friendly and professional. Would definitely recommend them to anyone.

Thank you to you and your team for all your help and support with the table theming for our UK 60-Year Anniversary celebration last night. Right from the very beginning, everything was so very professional and easy. The tables, gifts and award were absolutely fabulous and really added to the whole ambience of the evening, and I have had many wonderful comments about them from our visitors.